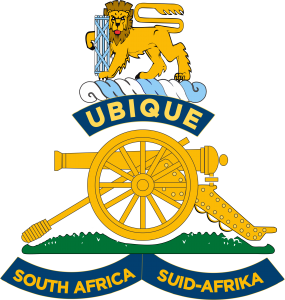 The Regiment was officially established with effect 1 April 1965 but remained a “paper” unit until activated in May 1966 in Brakpan at the headquarters of Regiment Oos-Transvaal when excess personnel from the latter were transferred into the new unit.

With minimal facilities available, the regimental commander’s home was used as a headquarters until 1968. Four years later the Chief of the SA Army authorised the transfer of the headquarters to Springs. It moved to Johannesburg in 1979.

The Regiment had a normal three-battery organisation and was equipped with the 35mm Oerlikon AA gun, including the Fledermaus Radar system.

In 1976 two batteries were mobilised for duty on the SWA/Namibian border with 61 Battery deployed to protect Grootfontein Military Base and 62 Battery at Rundu. After six weeks their locations were switched but 62 Battery was later moved to Ondangwa where its task was to protect the airfield.

During the intervening years, it had operated on a couple of border tours as an infantry unit. In 1986, 6 Light Anti-Aircraft Regiment was transferred to under command 8 Armoured Division and five years later to 7 SA Division. From the latter formation, it was placed under command of 73 Brigade.

It was awarded the Freedom of the City of Johannesburg on 9 November 2002. The Regiment was presented with a National Colour in August 1992 and on 12 January 2000 was affiliated with 14 (Coles Kop) Battery, RA.

In 2008 the HQ was moved to Apex Military Base, Brakpan.

6 LAA is currently equipped with the OQF 35mm MKV gun.

ABOUT US
MISSION STATEMENT – It is the mission of the Gunners’ Association to promote fellowships and camaraderie amongst all Gunners, whether from the Field Artillery, Air Defence Artillery, Anti-Tank Artillery, whether serving or retired; to promote Gunner Traditions, and to provide welfare and educational support to Gunners and their families.
Contact us: info@gunners.org.za
FOLLOW US
© The Gunner’s Association Non-Profit Organisation Number: 001-215 NPO National Headquarters: GEM Village, 53 Jan Smuts Avenue, Irene, 0062